Every game needs a bit of randomness

This is the first time we had to create a model to import into a game engine. Our task was simple: create a building based on one of three games:

The idea behind this project was to familiarize ourselves with modeling in the industry, use all that we learned throughout the semester and adapt to a specific style based on the game (in case we are hired to make models for any game, we need to adapt to the style of that game).

I originally wanted Fallout 4, but since this was a group project I was outnumbered and decided to go with Red Dead Redemption instead. The only reason I didn’t want this was because I couldn’t just play the game and take reference images myself, but alas I digress.

For my building I decided to go with the Sheriff’s Office. A very nice building, but with not that many references. The only ones I found are of the very front and a bit of the side or interior. 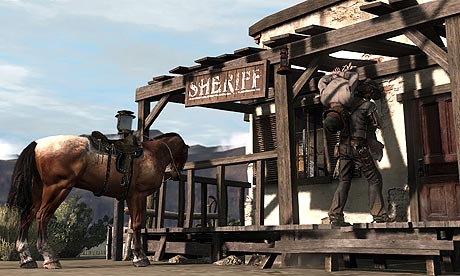 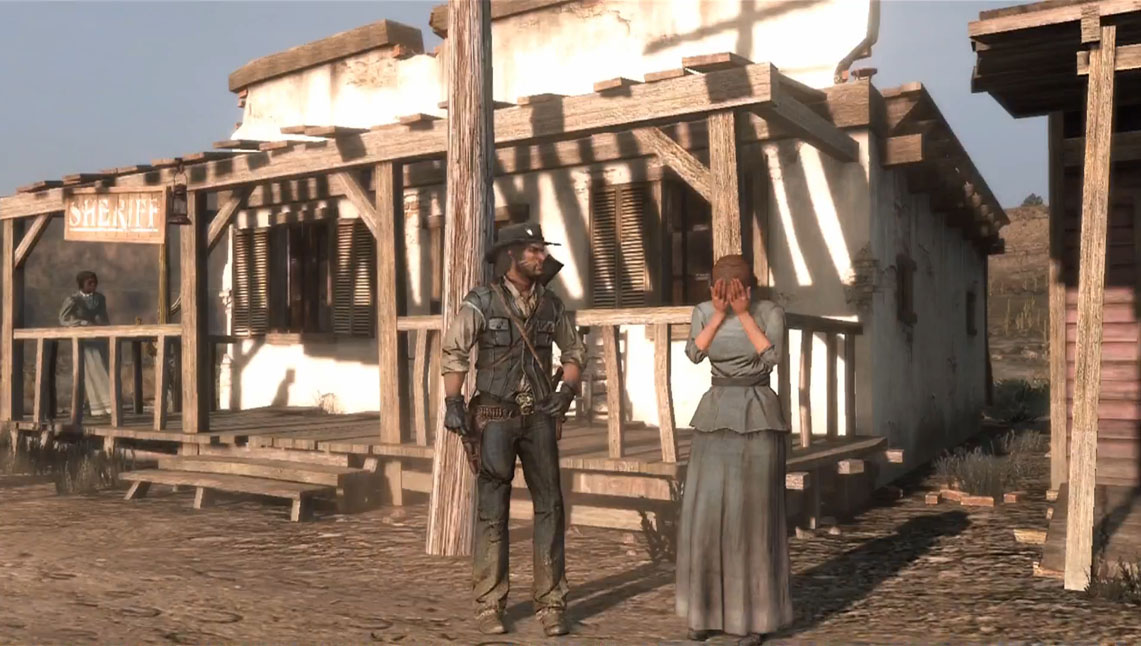 I even found a few youtube videos, but again, not much to go by for the back or sides.

First week was about getting ready with what to do, get reference images and block the scene. I actually struggled at first and took me more than it should have, only because I was frantically looking for a lot more reference images. In the end I decided to go with what I had found and start blocking. This took me about 4 hours.

I first started with the basic shape. I looked up online building dimensions and found a decent set of dimensions and created a rectangle to fit that size.

I then blocked the deck with roof, supports, fence posts and door.

I then added the stairs and the top and side overhangs of the roof.

Finally I blocked in the windows, shutters, sign and chair.

After I blocked everything, it was time to make each individual object, so that’s what I did. I modeled each separate object and put them on the side, with the exception of a few objects that I modeled directly onto the house, such as the windows, chair and overhangs.

So in order I started with the easiest pieces and moved to the more complicated ones. These are the objects in the pictures:

A bit of a side note, I actually had a problem with the door, that I didn’t see until I rendered it to see the progress. It was so messed up, I had to start from scratch on it.

The whole modeling process took 6 hours over the span of one week.

So, this time, I decided to first model everything, then fix the UVs and then texture all at once, rather than doing things piece by piece. I ended up using only 1 texture map out of the 2 that we were allocated. It took 5 hours over the course of 2 weeks.

I decided that what didn’t need to be that unique or have too much detail goes into a group, while what is more detailed or is unique goes into its own separate section. This way I devised the sheet so that, the walls cover most of the space – they are the largest objects and most visible, they take priority. Then I clumped all the wood parts into another group – this includes fences, pillars, planks, chair, door frame, window frame, top and sides of the roof and stairs. These were the 2 major groups that I could combine. Next came the unique ones. The door and its handle got its own space and cover a large portion – again, fairly large object, visible, must be high resolution. The sign obviously also got its own texture. Then the window shutters, I had to separate the ones from the left windows from the right ones, because they are slightly different sizes and the texture would look weird. Finally the windows get a a decent spot, but could be smaller since they are just black and finally the door handle, the most insignificant part, it gets the least amount of space, though with that much space left, I probably could have made it slightly larger.

Ah, finally, it is time to texture. Having done the UV properly this only took 3 hours, but only because I had to adjust the UVs a bit more and I messed around with shading and such. I also made a bump map. I went through a few designs for the wall as well, I wasn’t sure how to make it a bit more interesting. In the end I decided to give it some cracks.

All of the textures were downloaded from http://www.textures.com Which are all royalty free. I did have to edit the shutters as they were originally greenish, but it wasn’t that hard, just a bit of Hue Adjustments had to be made.

So in the final week I worked on getting the model converted to triangles and exported to Unity, set up the project files and everything. This took about 10 hours, the hardest and longest part of the project.

This project took a total of 28 hours. Probably 30, knowing how I work, but forget to update the work log. The previous project took 40 hours, which is understandable, it was a bit more challenging, but I feel like I improved. I worked faster, while still maintaining quality.

After hours of hard work this is the final product. I am personally impressed and can proudly say I learned a lot about 3D modeling this semester and am looking forward to the next steps in modeling. If it weren’t for my study abroad program, I might have never learned how to make 3D models.

Theme by Anders Noren — Up ↑